If you own an Air Arms TX200 MKIII and are having a problem cocking it completely, for example, the auto safety is not engaging or the anti bear trap device isn’t releasing, there is probably an easy fix. I bought a new TX200 recently and immediately began having problems. Once cocked, I could not get the anti bear trap device to unlock the cocking handle. I would have to hold the cocking lever as far as I could push it an then release the beartrap device and let up on the cocking handle. Also the auto safety wasn’t engaging. I searched online and found a lot of similar complaints but only one solution that didn’t involve sending the rifle back for repairs. The one solution I found involved taking the trigger assy completely apart and soldering a piece of metal onto one of the trigger parts. That’s a job too difficult for all but the most daring do-it-yourselfer. And after looking closely at the rifle and its superb quality and engineering I found it implausible that the Air Arms Trigger would need such altering.

If you find a post on an airgun forum that describes how to fix your cocking problem by modifying the trigger assy, DO NOT FOLLOW THOSE INSTRUCTIONS AND BUTCHER YOUR BEAUTIFUL RIFLE. It probably will fix the problem, but it will turn a 15 minute fix into a several hours long nightmare that you may never wake up from. The reason I am writing this is to save you from destroying your TX200.

Now, on to a quick fix for your rifle. Click on the photos to enlarge them. 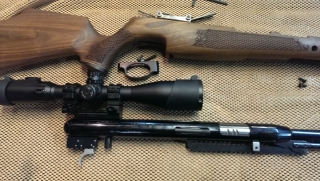 Release the cocking lever and open it until you feel resistance from the piston. The shiny angled stock bracket is now accessible. The single allen head screw that holds the stock bracket to the receiver should be the problem. Feel the head of the screw with your finger. If the top of the screw doesn’t sit flush with the bracket or a little below it, the cocking lever is hitting this screw and not pushing the piston far enough to engage the trigger sear and allow the spring loaded auto safety jump into position. If the screw is sitting flush or below the bracket, stop and put your rifle back together and send it back for repairs. DON’T BUTCHER YOUR TRIGGER. 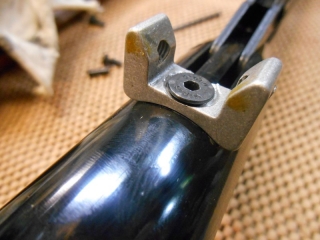 Here is a close up view of the screw sticking up above the bracket. The bracket has be countersunk to allow the screw to fit flush, but the countersink isn’t deep enough. I had already fixed this before I took the picture so I backed the screw out to show you what it would look like. This is a bit exaggerated. It originally only sat about half as high above the bracket than shown here. 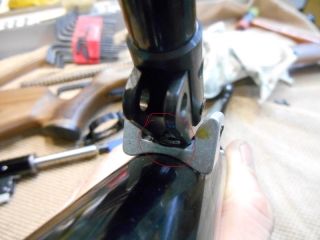 This is what happens when the cocking lever is fully cocked. Instead of the cocking lever stopping on the bracket it is hitting the screw head, which doesn’t allow the lever to push the piston back far enough to engage the trigger sear. 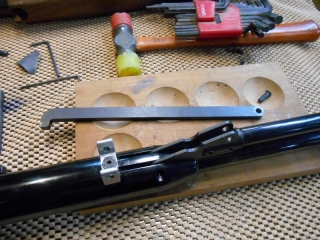 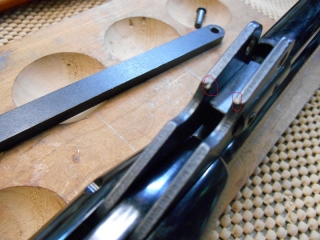 Notice in this photo the dents on the cocking lever where it was hitting the hardened screw instead of the stock bracket. 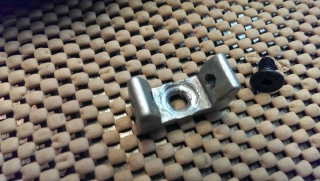 Use a 1/2″ drill bit to carefully deepen the countersink. Use a vise or clamp to hold the bracket and be careful not to let the drill bit catch in the hole and tear it out of your hand or drill right through the bracket. Once you can drop the screw into the hole and the head sits flush or below the top of the bracket you are finished. 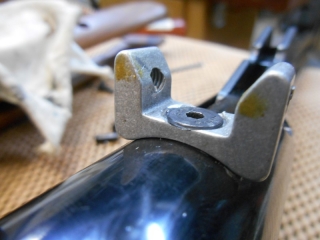 This is what the bracket should look like when reinstalled. The top of the screw now sits flush with the bracket. 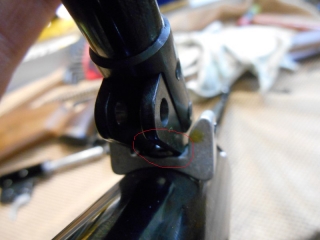 Also read my post on improving the safety so you can make it safe again without having to cock the rifle.

21 thoughts on “How to fix Air Arms TX200 Cocking Problem”