It’s been a long time since I posted something. I’ve been busy carving commissions, all of which are eagles I’ve already posted photos of me carving them. ZZZZZZZ…. Finally, I’ve caught up with orders and I’m going to carve something for myself, a large Bellamy Eagle I’ve never carved before. Though, it will be for sale if someone wants it.

I first saw this eagle at an exhibition of John Bellamy’s work. It is large and impressive. I’ve wanted to carve one ever since, but haven’t had the time. I now have the time. Let’s get to work.

I normally use clear white pine for my eagle carvings, but in this case I chose basswood. It’s about half the price. If you look close you can see the pattern has been traced on the black. For this eagle I needed a piece of wood 2″ thick by 10″ wide by 12′ long. This makes a blank 48″ wide by 30″ high. In the left lower corner you can see the head is traced out separately. This eagle has a big head.

The blank was too big for my 18″ band saw so I used a jigsaw to cut it out. Here you can see that I removed most of the wood on one wing. This was all done by hand with a big 9 sweep, 35mm gouge.

Here the other wing is roughed out. Notice the clamp. There was some natural checking in the wood and it started to split so I glued it back together.

Here I have carved the feathers on the other wing and am working my way toward the head and tail. This is as far as I can go until I blend the head into the body.

I’ve temporarily attached the head with some screws. I began shaping and detailing the head and started blending it into the body.

Now I can finish carving the feathers. It’s starting to look like something now. The grain on the head is perpendicular to the grain on the body. This makes it challenging to blend them together without tear out. Your tools have to be very sharp.

Here I have shaped the shield and carved the top foot. The toes sit about 1/2″ above the shield, so there was a lot of wood the remove. The shield curves in both directions.

I’ve added the stars to the shield, but can’t carve the stripes until the other foot is carved.

The other foot is carved and the stripes are added to the shield. This is as far as I’ll go until I do the back cutting in case I screw something up and have to make some changes.

My carving arms move 180 degrees, which makes it handy for back cutting. Back cutting allows you to keep the carving thicker and stronger while making it look light and thin from the front.

Here’s a photo showing the top of one wing back cut and also how the head looks from the back. Where the head meets the top of the body will be blended once the head is glued on and the screws are removed.

I removed the head to make it easier to detail the feathers. Most of the feathers will be quilled and veined before the head is permanently attached with glue and screws. 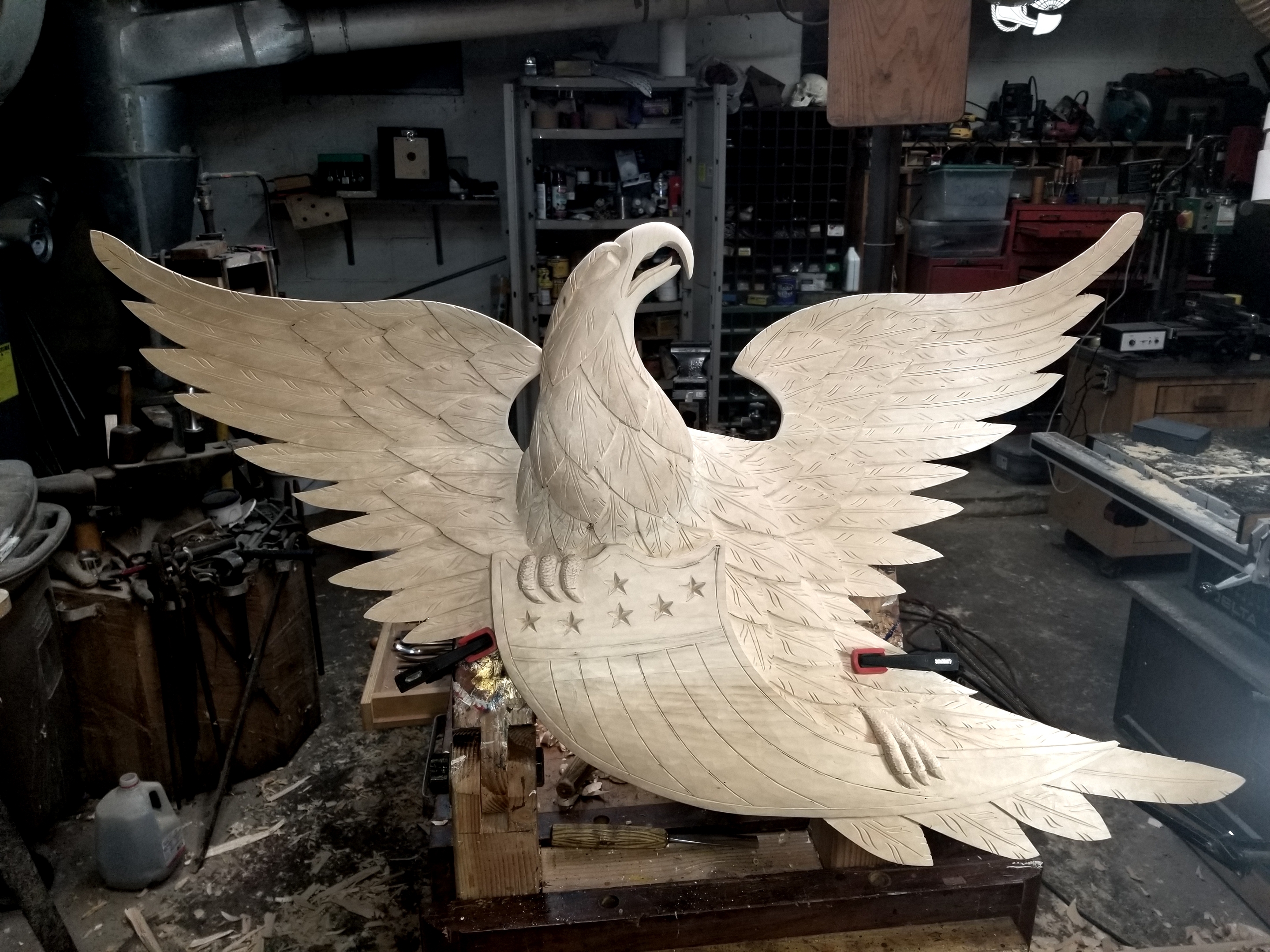 Here is the finished eagle. Click the photo for a close up look.

A link to purchase the pattern is below. If you’re interested in buying the eagle, visit my store for eagles.

I first saw this eagle at an exhibition of John Bellamy’s work. It is large and impressive. I’ve wanted to carve one ever since, but haven’t had the time. I finally got some free time. Here is the pattern. It measures 30″ tall, 48″ wide and 4″ thick.