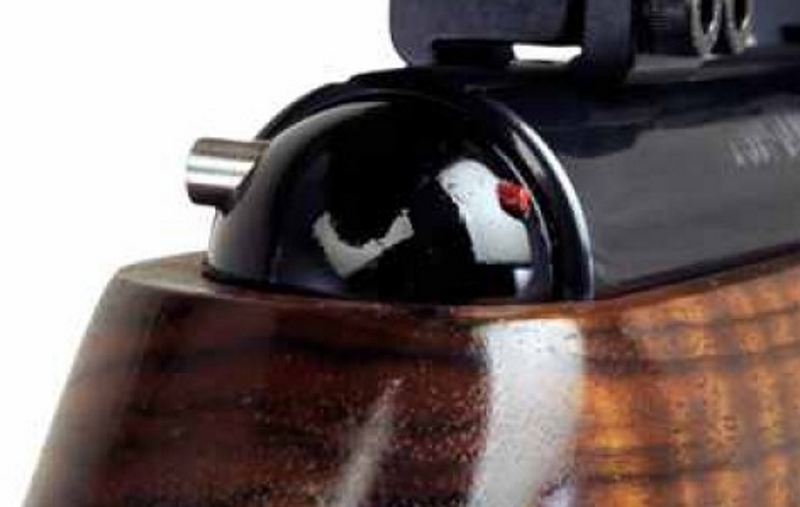 The Air Arms TX200 is a great air rifle, but is does have a couple of issues. The most common problem is the failure to cock or it cocks but the safety doesn’t catch. The internet is full of talk of this problem. In an earlier post I show how easy it is to fix.

One issue that is not easy to fix is the poorly designed safety. The photo above shows what the safety looks like on a stock rifle. Cocking the rifle automatically sets the safety to the “ON” position. That’s probably a good idea, but most firearms don’t work that way and it takes some getting used to. I’ve missed more than one squirrel because I forgot to push the safety off before squeezing the trigger. After some practice it becomes automatic. But what if you can’t take the shot and you want to continue looking for something to shoot at. Every other rifle I’ve ever handled allowed you to put the safety back on.

This rifle is British made, and is of the highest quality. What were they thinking when they designed the safety? Amazingly, it doesn’t seem to be a problem for most owners because no solution or aftermarket parts have been designed or sold to make the safety functional. I got tired of waiting for someone else to come up with something so I sat down and figured it out.

I’m not going to get too detailed about the mechanics of the gun. If you aren’t very familiar with how this rifle works, or how to disassemble it enough for this project you shouldn’t even try it. What I’ve done is more of an experimental prototype. As you’ll see, I messed up my rifle somewhat experimenting. But I’ll replace the end cap on the barrel that holds the safety button and fix the small spot on the stock. No big deal. 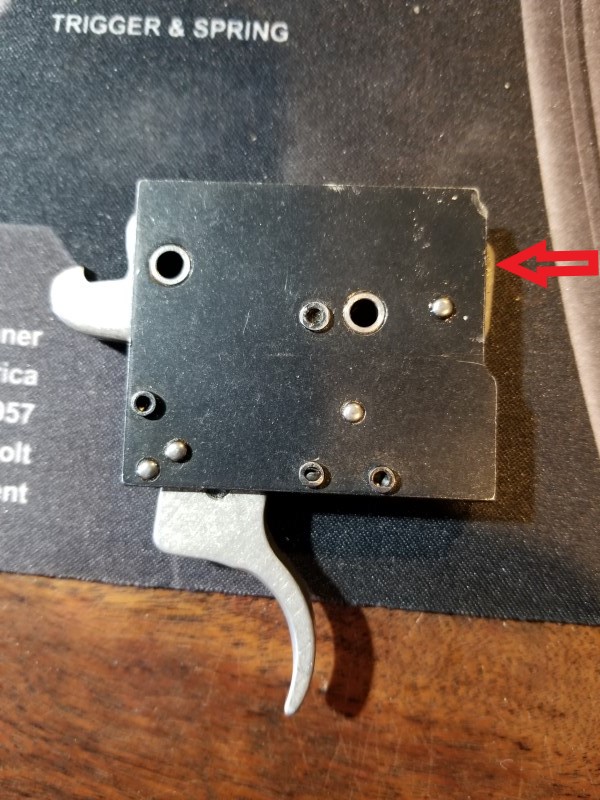 The safety button works by holding the middle sear forward a millimeter or two, preventing it from pivoting and releasing the top sear which releases the piston. The red arrow is pointing to the middle sear in the position it is in with the safety off. 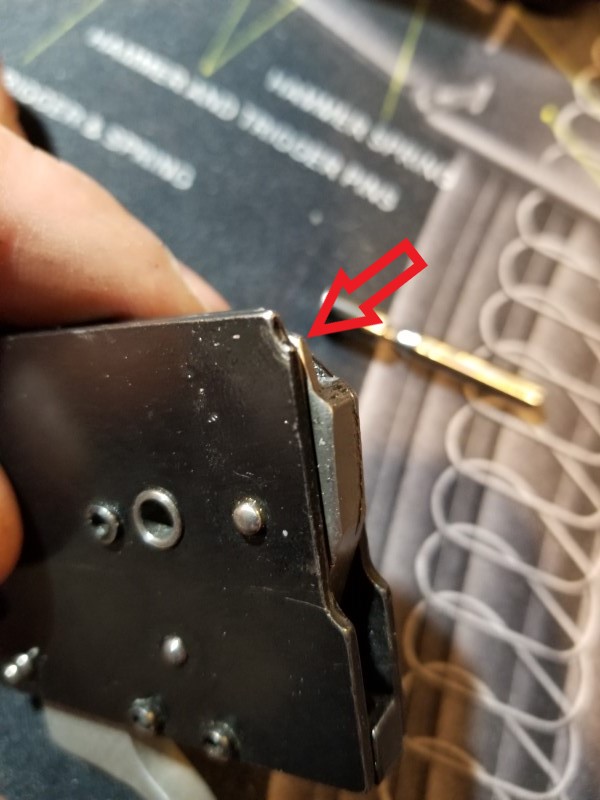 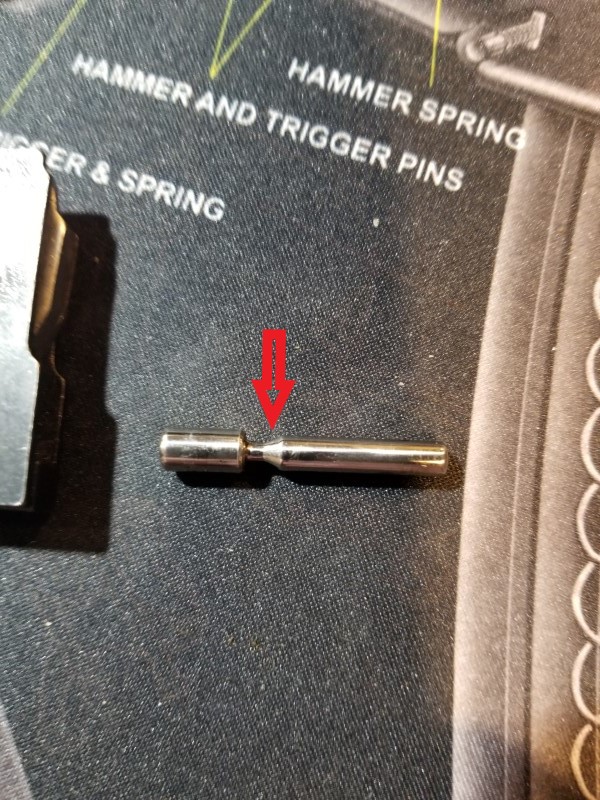 To solve the problem I made a new safety rod, turned from a piece of stainless steel. The arrow is pointing to the fix. On the original rod there is no ramp. It’s cut straight down like the cut just to the left of the arrow. Without the ramp there is no way to push the rod back into the safe position. The sear stops it. On the new rod, the ramp allows the rod to push the sear forward again. Once the rod moves far enough to the left the sear is held forward until the safety button is pushed again.

The original safety button/rod is too short and too thin on the opposite side of the button, so a new one must be made. You can’t modify the old one. The hole on the right side of the end cap will have to be enlarged to allow the new rod to go all the way through. 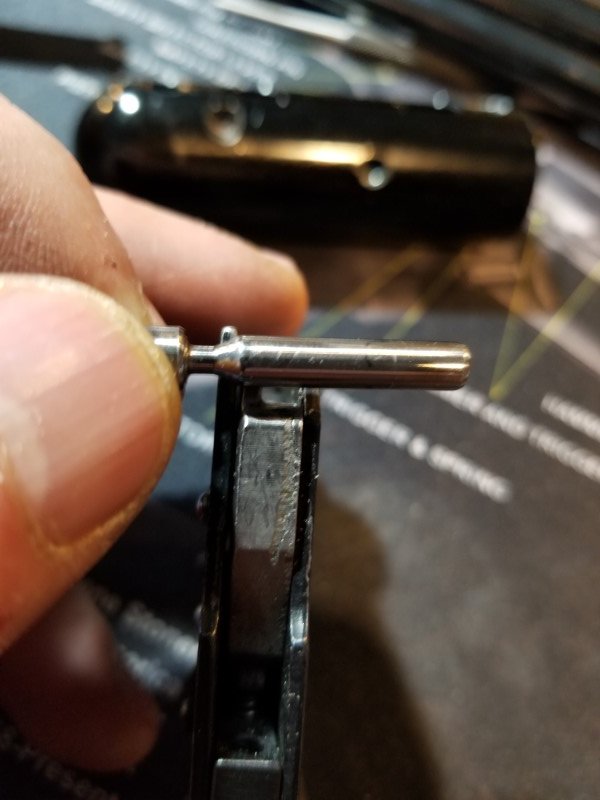 This photo shows the position the safety rod will be in when the safety is engaged. The blade at the top of the sear is resting on the rod past the ramp. Notice the big vertical gouge on the back of the sear. That’s how it came. Must be a defect in the casting. 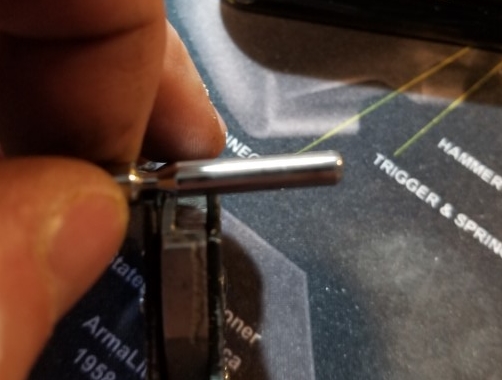 This photo shows the position of the rod with the safety off. You can see the blade at the top of the sear is resting on the ramp, not at the narrow band at the bottom of the ramp. 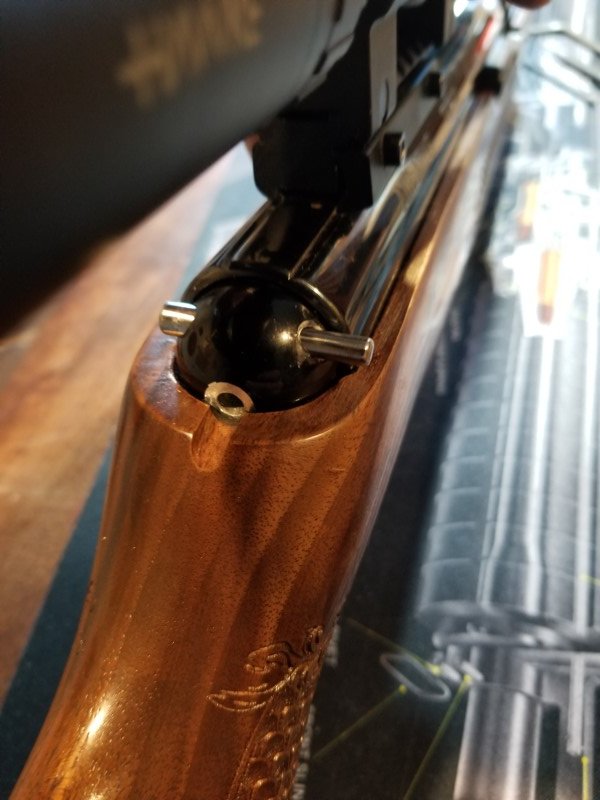 Here’s what it looks like in the gun. Again, this is just a prototype so it is too long. It’s also too narrow. The small end on the right side makes it a bit uncomfortable on your finger when pushing the rod to the left to engage the safety. But it has to be thinner than the other side or you won’t be able to install it. And there has to be a stop to keep it from pushing all the way through. I plan on turning the right side down and threading it so I can screw on a larger diameter cap that’s more comfortable on the fingers.

I’m sure you noticed the hole in the back of the cap and the notch cut into the stock. That was from my first unsuccessful attempt. I put a spring loaded button in that hole that pushed the back of the sear forward enough so to allow the original safety rod to spring back into position. It worked, but because the rod pushed on the sear closer to the pivot point, it lost a lot of leverage and was very hard to push. I abandoned that idea, but only after cutting a notch in my stock. When I buy a new end cap I will repair the stock. 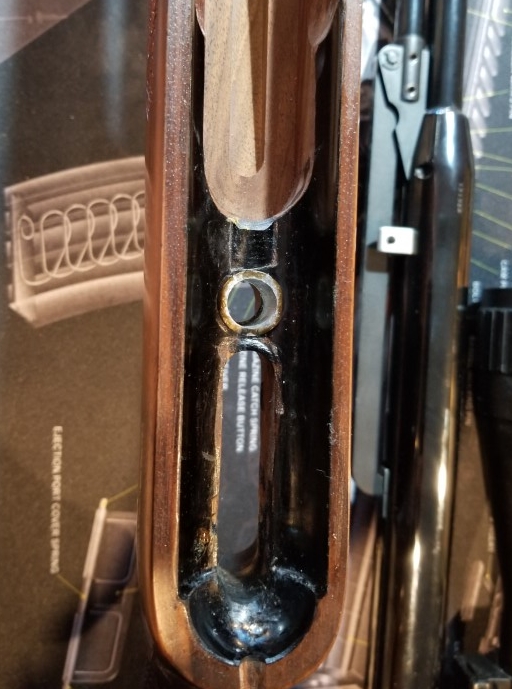 While I had the rifle apart I decided to pillar bed the stock. The rifle is very accurate but I was getting unexplained flyers, so I figured I’d give bedding a try. You can see the aluminum pillar in the hole for the front bolt. I turned a custom pillar on my lathe. This prevents the bolt holding the action to the stock from compressing the wood. The action sits solidly on the top of the pillar and the bolt tightens against the bottom of the pillar making a very stable and solid connection. The inletting of the stock from the factory was excellent. It took very little  bedding material to fill the voids. The action fits in the stock very tight now. I haven’t had a chance to check the accuracy yet, but It should help.

I’m very happy with the results. It’s not a perfect solution, but until Air Arms redesigns the trigger group and safety system, or someone makes an aftermarket replacement, the fix will do. It’s nice to be able to use my TX200 like any other rifle and move the safety on and off as needed. I’m going to buy an new end cap and tidy things up so it looks nicer, but for now, it works!